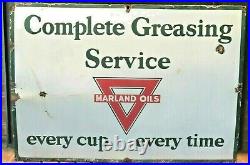 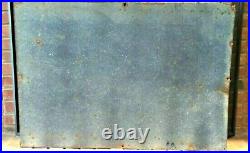 Vintage Original Marland Oil Company Porcelain Greasing Service Sign – Fair Condition! Dings, chips, scratches, rubs, and dents. Very Old Pre-Conoco Sign. Made by the Veribrite Signs of Chicago. Please use the zoom function on your computer to view the pictures to determine the condition. All items are Vintage Original and have been part of my collection for 20 – 40 years! Dimensions : 40″ x 28″. Within a 100 mile radius of Corydon, IN 47112. Marland, an oil exploration pioneer. Marland was recruited to Oklahoma in 1908 by the Miller family, owners of the famous 101 Ranch and close friends of the Ponca Indian Tribe, and together they established the 101 Ranch Oil Company in partnership. Marland’s first successful well, Willie Cries for War, was drilled on Ponca Indian land in 1911. Later, Marland assembled his various holdings including the 101 Ranch Oil Company into one unit, forming Marland Oil Company in 1917. In 1921, Marland Oil Company became a Delaware corporation and acquired control of the Marland Refining Corporation and Kay County Gas Company. Marlands success was unparalleled. By 1922, nearly 600 Marland stations were in 11 mid-continent states, from North Dakota to Oklahoma and east to Indiana. To continue growth, Marland secured financial backing from Investment Banker J. Morgan, but not without consequences. By 1928, Marland had been forced out of Marland Oil by J. Morgan, who placed former Texaco executive Dan Moran in charge. With orders from Morgan to put Marland Oil back in the black, Moran set out to acquire key assets and partners that would round out the Marland operation, provide for increased financial stability and offer complimentary assets. In late 1928, talks began with Continental Oil Company with these goals in mind. In the meantime, Marland Oil had acquired Baltimore based Prudential Refining, an ideal refinery with East Coast marketing access for Marland’s crude oil production. This acquisition set up the merger with Continental, which would use the Baltimore facility to supply Continental’s existing Mid Atlantic marketing efforts, create substantial growth in retail service stations, and, most importantly, increase cash flow. The merger was approved on June 26, 1929. Although Marland Oil had been the purchaser, management chose to retain the older and more accepted name, Continental Oil Company. Headquarters for the new company were Marland’s old Ponca City, Oklahoma offices, with the former Conoco offices in Denver being retained as a district office. The new marketing logo was a combination of the two previous logos, the Conoco name emblazoned on the crossbar of the famous Marland red triangle. It was an emblem that would remain in use, with minimal change, for the next 40-plus years. The item “Vintage Original Marland Oil Porcelain Greasing Service Sign Fair Condition” is in sale since Sunday, January 31, 2021. This item is in the category “Collectibles\Advertising\Gas & Oil\Merchandise & Memorabilia\Signs”. The seller is “roxper78″ and is located in Corydon, Indiana. This item can be shipped to United States.